You Can Count on SERVPRO for Storm-Related Disaster Mitigation Services 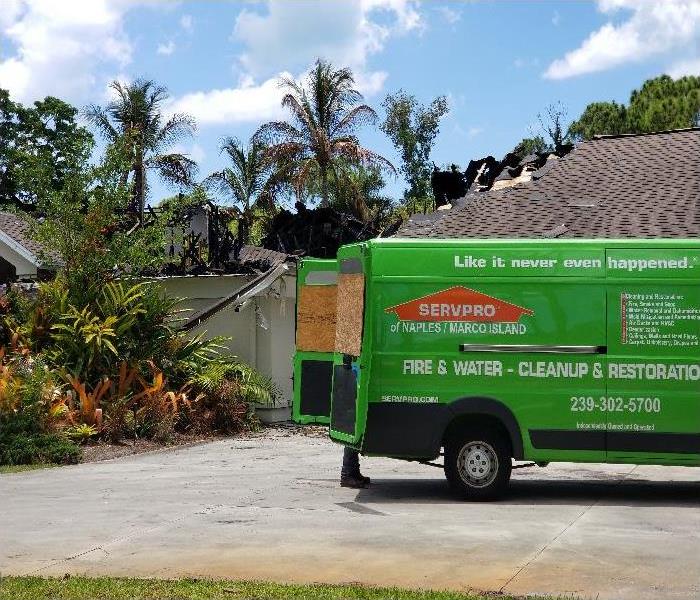 When a storm damages your home you need to call the experts at SERVPRO!

Naples is a vibrant community that is home to a wealth of opportunities for residents since its inception. The city’s nearly 20,000 citizens reside at an elevation of approximately three feet along the Gulf Coast. Prominent businesses like payment systems giant ACI Worldwide, arthroscopy industry leader Arthrex and construction powerhouse Florida Rock Industries are all based in Naples. This peaceful coastal community in southwest Florida requires a well-trained emergency response crew to handle disasters and maintain a high standard of safety for homeowners and businesses alike.

The Paradise Coast is also home to plenty of opportunities for tourism year-round. Between the white sands of Naples Beach and a plethora of shopping, dining, and entertainment options from 3rd Street South to 8th Street South, Naples has much to offer trendsetting young professionals and vacationing families alike.

Storm Damage Cleaning, Removal, and Repair for Naples, Florida Residents
The Institute of Inspection Cleaning and Restoration Certification (IICRC)-accredited crew at SERVPRO of Naples / Marco Island is locally-owned and operated. This commitment to local service puts our team in a unique position to offer high-quality, commercial-grade resources that restore homes while staying in touch with the Naples community.

•    We're only a phone call away from providing you with the necessary cleanup and restoration services at (239) 302-5700.
•    SERVPRO technicians, staff, and franchise owners all receive extensive education about disaster cleanup and home restoration so that the community at large can benefit.
•    Our constant availability, even on nights, weekends, and holidays, ensures that damage to your home is minimized while streamlining the claims filing process.

Whether you run a motel near Naples Beach or live along Gulf Shore Boulevard North, restoration professionals can prevent losses like those incurred by the massive Hurricane Irma in 2017. This Atlantic storm is considered the strongest observed since 2005, making landfall as a Category 4 storm before impacting Marco Island as a Category 3. Winds reached a whopping 112 miles per hour just a few short miles south of Naples. Hurricane Irma required the most massive statewide evacuation recorded in the state of Florida at 6.5 million residents.

Common Situations That Create Storm Damage on Naples Properties
Located along the coast on the southwestern tip of Florida, Naples is a beautiful coastline beach town that stays warm year-round. The locale’s hurricane season, which lasts from June to November, creates storm and flood damage risks from both hurricanes and tropical storms. Summer and autumn are typically much more precipitous than the rest of the year, seeing as much as two to six times more rain than the spring or winter months.

Naples residents would do well to prepare their homes for a variety of storm, flooding, and hurricane-related events, such as:

•    Meteotsunamis, like the high-tide storm event near Naples Pier in January 2016, can leave homeowners suddenly looking for high ground. These rare weather phenomena, created by sudden changes in pressure, can bring 70 to 90 mph winds and sudden cold fronts. The meteotsunami that occurred in December 2018 quickly flooded Naples beaches, causing local tide gauges to rise more than one foot in less than one minute.
•    Tropical storms during the wet season comprise much of the record rainfall and flood risk for homeowners in Collier County and the surrounding areas. After Tropical Storm Sally passed through southwest Florida, water levels rose several inches, causing flooding so significant on Sanibel Island that fish washed up on Tarpon Bay Road in Sanibel.
•    Naples’s proximity to the Caribbean and Central America can mean exposure to several hurricanes per year. Fortunately, in many cases, Naples is spared the worst of the damages to property and infrastructure. However, some severe storms, like Hurricanes Irma and Wilma, did directly impact the city.
•    Naples sees an average of 54 inches of rain per year. This figure is much higher than the United States average of 38 inches.

Due to Naples’ location and flood risk potential, homeowners can save considerably on flood insurance policies. According to 2018 data, there are currently over 14,000 active flood insurance policies. Because Naples is considered a Class 5 by the National Flood Insurance Program’s (NFIP) Community Rating System (CRS), meaning policyholders can receive up to 25% off of their insurance. The City of Naples as a whole saves an estimated $3.9 million per year on flood protection premiums because it participated in the NFIP’s CRS.

What Mitigation Services Does SERVPRO Perform for Storm-Damaged Homes?
Storm damage on Naples properties can take many forms. SERVPRO technicians offer a plethora of services that remove debris, make necessary structural repairs, and coordinate with both insurance adjusters and homeowners to ensure that restoration is performed with you in mind.

•    Licensed professionals. Your local SERVPRO company is also licensed to render mold remediation services (license #MRSR2994) that eliminate microbes with a variety of commercial-grade tools such as:
-HEPA filter air scrubbers.
-Industrial-grade dehumidifiers.
-EPA-registered antimicrobial solutions.
•    Rebuilding services. Whether you need carpeting and drywall replaced after a flood or you need lightning-fast roofing repairs to stop further water damage, this team can assist you.
•    Contents restoration. SERVPRO also has equipment and facilities available to perform both on- and off-site restoration of upholstery, electronics, documents, and valuables, depending on the extent of the disaster. We strive to minimize property losses to help you save on repair and replacement costs.

SERVPRO of Naples / Marco Island has a professional crew that is ready to make your home look and feel, “Like it never even happened.” Call your local mitigation team today at (239) 302-5700.